It includes all her official recordings between 1967 and 1979, except the TV specials recordings and her 16 recordings in German for which the master tapes are considered lost. 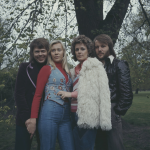